Mobile Apps Still Ahead of HTML5 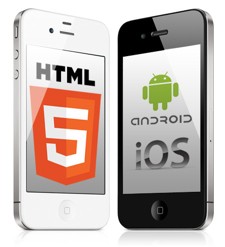 A recent research paper from Moovweb and Forrester has noted that, by and large, HTML5 apps are still lagging behind native mobile apps with developers. Two main complaints are still at the forefront of the debate:

• Delays in development. More bugs. According to a survey referenced in the paper, most of the time, apps developed using HTML5 are delayed in delivery. As developers report, testing and fixing bugs is soaking up the largest piece of the time lost. This means that more time and effort go into HTML5 development, and that developers encounter more headaches along the way.

• Delays in running. HTML5 apps are just slower. Devs note that updates are delayed and stock browsers on devices can also lead to issues. With performance problems, developers have a lower ceiling on how well their app will do with users. These limits on what they can do are frustrating, to say the least.

As a result of these problems, developers are viewing HTML5 as appropriate only for limited circumstances, as opposed to being the skeleton key to the mobile world some might have originally dreamed it might be. The idea of developing once for all devices is enticing, but in practice, there’s still a lot of room for improvement. Even with advanced responsive design tools and practices, native is still in the lead. Here’s why:

• Native is much faster. As we noted above, HTML5 apps run more slowly. In an on-demand world, this is a big problem. Telling people to be patient simply isn’t going to work. Users are accustomed to instantaneous gratification, and native apps give it to them.

• Native has way more functionality. Native apps can make use of a device’s special features, like the accelerometer, GPS, camera, and more. Because of this, the native app experience is often much more robust and inventive, further lowering the ceiling of HTML5 apps.

• Native has less bugs. With ready-made tools, many of the leading native platforms make it very easy for developers to build what they need and have it work smoothly with minimal tweaking and debugging. We’ve already mentioned some of the problems of the development experience with HTML5 – compared to that, the native experience can be a walk in the park.

For now, HTML5 still leaves a lot to be desired from a user and developer standpoint. Whether that will change as time goes on remains to be seen. But today, native is pretty solidly on top
To get started and how inexpensive XPLORIONS mobile packages can be, click here.