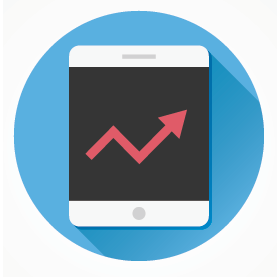 Experts in the industry are suddenly throwing around the term “mobile app revolution”, saying that the unprecedented explosion of the mobile app market is comparable to the industrial revolution. It seems mind-boggling, but it’s true.

The numbers don’t lie. Nearly 103 billion apps were downloaded last year, which was up by 59% from the previous year.

Those numbers will only grow exponentially for 2014. With 86% of Americans owning a smart phone, and millions of others owning secondary devices like tablets and iPods, the demand for functional apps is only going to get larger.

What does it all mean?

Experts are predicting that the numbers are going to keep surging. New technological developments are being unveiled every day, and smart phones and tablets are only becoming more accessible to everyone. It is predicted that there will be a mass demand for apps ranging across all industries – people are going to come to expect apps for pretty much everything.

It seems to be happening already. Just about every industry you can think of has an “app for that”. You can do everything from schedule a dentist appointment to checking out a pizza menu, to playing Angry Birds to video chatting with an overseas relative – all using apps.

But are people going to grow tired of apps? Nope!

Right now, apps are booming. The demand for them is higher than ever. If you want your business to succeed, you should implement an app for your customers that puts them directly in touch with your business, offering them all the functionality and engagement they need. XPLORION an easy to use, platform that can get you started, quickly and affordably.