Ethereum Reaches $1,400, Despite Its Major Issues 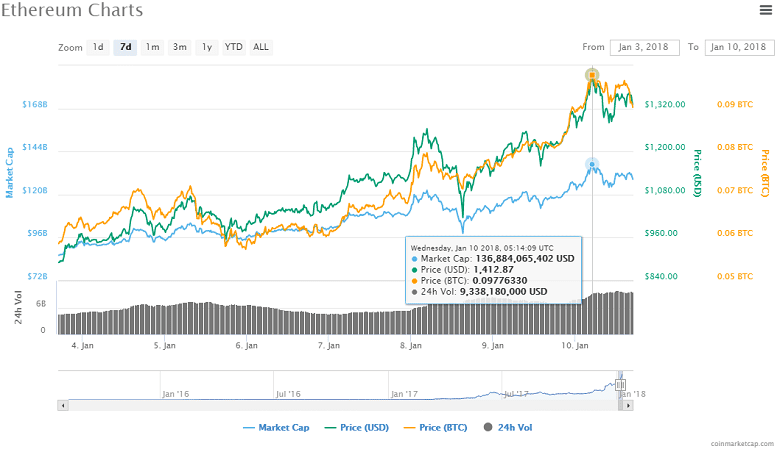 Ethereum has begun slowly climbing the charts and hit an all-time high today despite its many network issues.

This weekend, a major exchange removed the cryptocurrency from its systems due to the rising price causing a wave of technical issues. News of these issues has been on the low, as many investors have been made unaware of them. The largest issue is a glitch in ethereum’s “gas oracle” which determined how much a transaction would cost to send ETH. This glitch has caused a massive inflation in user fees, which prompted Bittrex to remove the coin from its exchange. Some investors were lead to overpay for their transactions by over an enormous 70% and the ethereum development team is hard at work trying to figure the mess out.

Another issue facing the network is that the network nodes have been unable to sync to the blockchain. For those disconnected, it either completely blocks them from entering or they’ve been left with substantially long wait times to connect. This issue has been circulating for some time now but has spread to any new node wishing to mine Ether or run the blockchain, has now been faced with these issues.

Lastly, ethereum has been having major setbacks that aren’t necessarily affecting the live network but has slowed the much anticipated Casper test network down. A Casper developer states that the nodes not being able to connect to its network has nothing to do with the code itself and are working diligently to get this fixed.

Casper is the solution to scale ethereum’s currently limited blockchain and many of its long-time investors, have been patiently waiting for its launch. For now, it seems the developers have their hands full with a copious amount of issues needing to be immediately dealt with and scalability has been put on the back-burner.

It is still unclear as to why ETH has been surging and has broken new record highs, with its heavily inflated transaction fees and node issues. Hopefully, Ethereum’s core team can work quickly, as the coin has a major potential of a sudden drop as investors begin catching on to its current issues.

South Korea and Japan Sign Agreement to Help Fight for Wider Use of Blockchain Technology
January 11, 2018
Ethereum and Bitcoin Cash Are Soaring Despite A Broader Selloff
January 11, 2018