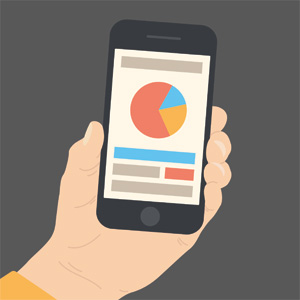 A new report released recently has some truly eye opening information about how people are using their mobile phones. See how Mobile App Usage Increases 6 To 1.

According to the report, which was conducted by Flurry, 86% of the mobile time spent by American consumers is devoted to apps. That is six times higher than the time spent on mobile web (via a browser like Safari or Chrome), which was at 14%.

The statistics break down as follows:

American mobile users spend on average around 2 hours and 42 minutes a day on their smart phones and mobile devices. Of that time, 86% is spent using apps – 2 hours and 19 minutes. Mobile web time, at 14%, is only about 22 minutes a day. Of the app time, the most popular apps used were games (32%), Facebook (17%), Twitter (1.5%), other social networking (9.5%), YouTube (4%), and other entertainment (4%). For mobile web time, Apple Safari and Google Browsers were the most used, at 7% and 5%, respectively. Consumers used mobile web time for news, productivity, and utilities, mostly.

So what does all this mean?

It means that Americans use their phones, a lot. What are they mainly using their phones for? Utilizing apps. They are using apps for everything, ranging from games and entertainment, to social networking, to taking care of business and household needs.

Just a few short years ago, apps were considered a flash in the pan trend, but now it has become clear that they aren’t going anywhere.

Apps dominate mobile usage, there are no two ways about it.

Browsers, while once the sole way to surf the web, are now just considered another app amongst many. Companies are following suit – even ones like Google.

Are you ready to join the throngs of savvy businesses that are creating apps and mobile optimized websites? Get started with Logifusion Mobile Apps today.