Rapid Growth of Mobile Commerce: 32% of Online Purchases Made via Mobile Devices. 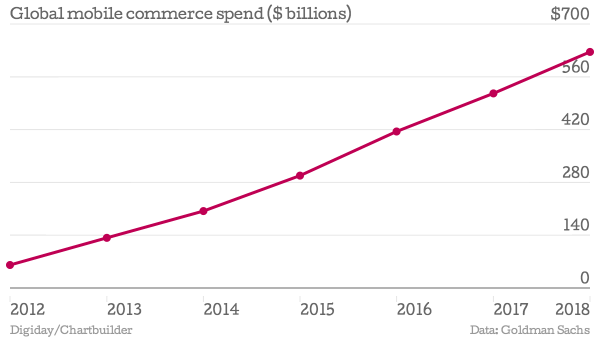 No one can deny the rapid rate in which Mobile Commerce is growing, we know that 32% of Online Purchases Are Made With A Mobile Device.

A recent report from comScore showed that online retail spending had grown by 14% last year, while total consumer retail spending had only grown by single digits. At the moment, most online spending is still happening over desktop and laptop computers, but that is expected to change, and soon, according to recent data from the U.S. Census and other sources.

Mobile Online Spending is the Way of the Future.

People might still be using their computers to buy online, but they won’t be for much longer. According to Digiday, commerce is one of the industries that will be most affected by growing mobile platforms. According to a forecast by Goldman Sachs, global e-commerce is expected to grow to $ 638 billion by 2018. Goldman also asserts that it will be tablets rather than smart phones that will be the primary source of online spending.

Currently, 32% of online purchases are made with a mobile device.

With something like 86% of mobile time being spent on apps, it only makes sense that many of these purchases are being done through apps. More and more companies are utilizing apps and mobile-optimized websites to allow their customer to pay for goods and services.

Should You Join the Trend?

Yes, you should. Allowing your customers to purchase via an app, rather than in-person, over the phone or even from a computer, will allow them ease of access, be more convenient to their schedule, and fast and efficient. In-app purchasing can be customized to your business, through promotions and incentives, rewards programs, geo-fencing (to recruit and reward customers through their location), and more.

U.S. Residents are currently spending on average around 2 hours and 42 minutes a day on their devices.

It stands to reason that these people are doing some shopping. Why not offer them an app that can help them do it easier? It could really benefit the growth of your business.